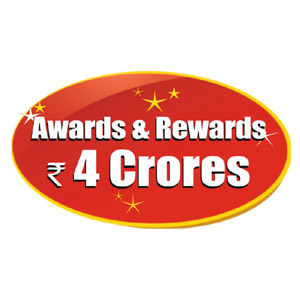 When more than one student gets an equal top score, priority for awarding ranks will be according to the marks acquired in the specified order of sections in the question paper.

In case of a tie in deciding a rank because of the same marks, the time taken for completing the test is considered for deciding the rank. One who has taken less time for completing, gets the upper rank.

A) NSTSE Topper is awarded Rs. 2,00,000 cash prize*. The student who achieves the 1st rank and highest percentage of marks among all the classes is declared as NSTSE Topper.

B. The Top Rankers and next 2 Rankers in each class are awarded a Laptop and a Tablet PC respectively + a Memento to, each.

All the Rankers of class 1 to 9 (1 to 100 rank) are each awarded Olympiad Coach Online Subscription worth Rs. 1198, a Medal and a Certificate of Appreciation.

Participation certificates are offered to all students who appear for the examination.

Top 3 rankers of class 1 to 9 from each State (minimum of 10,000 students in a particular State) are awarded with a special award for encouragement. He/she is awarded with Olympiad Coach Online Subscription worth Rs. 1198, and a Certificate of Appreciation.

Note: State-wise ranks are declared after excluding the top 100 ranks across the Globe.

Top rankers of class 1 to 9 from selected cities* are awarded Olympiad Coach Online Subscription worth Rs. 1198, and a Certificate of Appreciation.

Note: City-wise topper is declared after the 100 ranks across the Globe and state toppers.

City Rank (for every Class) is declared for classes having a minimum of 500 students in a particular city.

NSTSE Topper: A student of any class who achieves 1st rank and 100% marks is awarded a prize money of Rs. 2 Lakh. If no student achieves the same, then the student who achieves the highest percentage of marks among all the classes, is awarded Rs. 1 Lakh. If more than one student achieve the same, the prize money will be distributed equally among them. Each topper will get either this prize or the regular prize.